Got Windows 64-bit and want the latest Firefox? Try Waterfox 11 instead 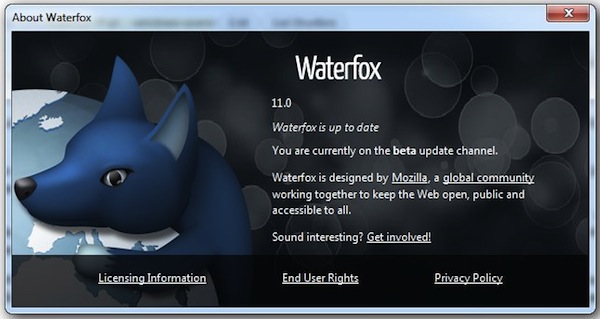 Hot on the heels of the slightly delayed official unveiling of Firefox 11 FINAL comes  Waterfox 11.0 , an optimized build of the Firefox source code for Windows 64-bit users.

Waterfox 11.0 contains exactly the same updates as Firefox 11 (see below), plus one major change of its own, a switch from AMD’s Core Math Library (ACML) to the AMD LibM library, which is optimized for 64-bit processors.

Aside from the change to AMD LibM library, Waterfox 11.0 has also been compiled with a new set of flags from the original Firefox 11.0 source code, which should help improve performance further. Other changes, as expected, simply mirror what are already present in Firefox 11.

These include limited support for importing data from Google Chrome, the ability to synchronize add-ons via Firefox Sync, updated support for various HTML5 and CSS standards and redesigned media controls for HTML5 video. Waterfox 11 also includes the two enhancements for developers: a CSS Style Inspector and Tilt (3D) view for HTML pages.

64-bit users wishing to switch to Waterfox 11.0 will need to install 64-bit versions of Java , Adobe Flash Player and, if required,  Microsoft Silverlight .

Note that Waterfox uses exactly the same preferences and user files as Firefox, which makes switching painless on the one hand, but does mean you should uninstall the program with care should you wish to revert back to the 32-bit version of Firefox: make sure you deselect any option to delete your personal preferences and files before proceeding to remove the program.

Waterfox 11.0 is a free download for PCs running 64-bit versions of Windows XP, Vista and 7. Other users looking for a version of Firefox that has been optimized for speed and performance should check out  Pale Moon 9.2 instead. Although not as updated as frequently as Firefox itself, Pale Moon’s developer has  hinted that a new build based on Firefox 11 may surface this month.

Filed under browsers, software by al